A strange winter is upon us. With that in mind, Compulsion Rites is proud to announce its newest release:

SICK/TIRED "The Lasse Marhaug Remixes" - Venerable Norwegian experimental artist LASSE MARHAUG takes on one of the mot exciting and destructive units in modern extreme music. Taking 2 tracks from SICK/TIRED's powerhouse album on A389 Records, "Dissolution," Marhaug tears them apart and rebuilds them as throbbing harsh industrial tracks that call to mind classic power electronics acts like Survival Unit and Grey Wolves. Professionally dubbed and imprinted C30s by Cryptic Carousel out of NYC, with 100# text-weight j-cards, in a limited edition of 100 copies.

This item will begin shipping on Monday, March 7th, and Sick/Tired will have copies available at their show in Chicago on March 6th at Mousetrap with sludgelords Fistula.

$8 ppd USA. compulsionrites AT gmail DOT com for payment. Tracking info will be provided upon shipping.

ATTENTION INTERNATIONAL CUSTOMERS: after years of failing to produce consistent results on my part, I have now ceded international orders to the highly-respected and always reliable ANALOG WORSHIP. Yosef will be receiving distro copies sometime in the next 2 weeks, so please keep an eye out as he will be your only source for this and all future Compulsion Rites releases.

Posted by Compulsion Rites at 7:58 AM No comments:

Compulsion Rites is proud to announce some new releases:

Plague Mother "Dying, Midwestern"c30+c20+zine - the follow up to last year's full-length, "In Memory. In Skin. In Bone." is at the same time a love letter, a death threat, a birth announcement, and a eulogy to the literal and metaphorical landscape which Roman J Leyva is rooted in - specifically that of the No Coast. What becomes of oneself when you accept not only the permanence of your own being, but of your environment? Does the ice simply freeze the earth? Does the rust merely erode the steel?  Over 50 minutes of dynamic and personal heavy electronics comes couples with a zine of collage work and writings both new and selected from Leyva's previous lyrical and zine works in an Edition of 100, with a Special Edition of 35. Special Edition includes a poster, patch, and a CDr featuring nearly an hour of remixes and reinterpretations by Developer, Shredded Nerve, Skin Graft, Collapsed Arc, Scant, Swallowing Bile. Glacial23, Murderous Vision, and Xterminal. $15 U.S. Ppd / $20 WORLD ppd Special Edition: $25 U.S. Ppd / $30 WORLD ppd

V. Sinclair "The Bell Tower" c20 - With only a handful of releases, Sinclair has established a powerful presence in the North American noise landscape. His signature unique blending of elements of harsh noise, ambient, and musique concrete with masterful helming of field recordings, synth, and tape are employed to compose yet another stunning, moving release. Edition of 50. $6 U.S. Ppd / $9 WORLD ppd

Sunken Cheek "Earth Of No Consequence" c30 - Western NY is easily a nascent heavy hitter in the North American noise scene. Sunken Cheek is a hidden gem within a hidden gem in this regard. Two dynamic and simultaneously claustrophobic side-long pieces that embody the kind of disconnected, obscured, and alienated existence found there. Edition of 50. $6 U.S. Ppd / $9 WORLD ppd

Hostage Pageant / Plague Mother "Subterranean Values" split c20 - Hostage Pageant needs no introduction at this point. Shane Church is by far and large one of the leaders of the vanguard of the new North American heavy electronics movement and the track on this release serves as a reminder of that fact with stern authority. Plague Mother provides reinforcement on the B side with more frenetic and feverish waves of anxiety. Edition of 50. $6 U.S. Ppd / $9 WORLD ppd

Posted by Compulsion Rites at 9:39 PM No comments:

We are in the midst of the forever nights of summer. Compulsion Rites is proud to present to you: 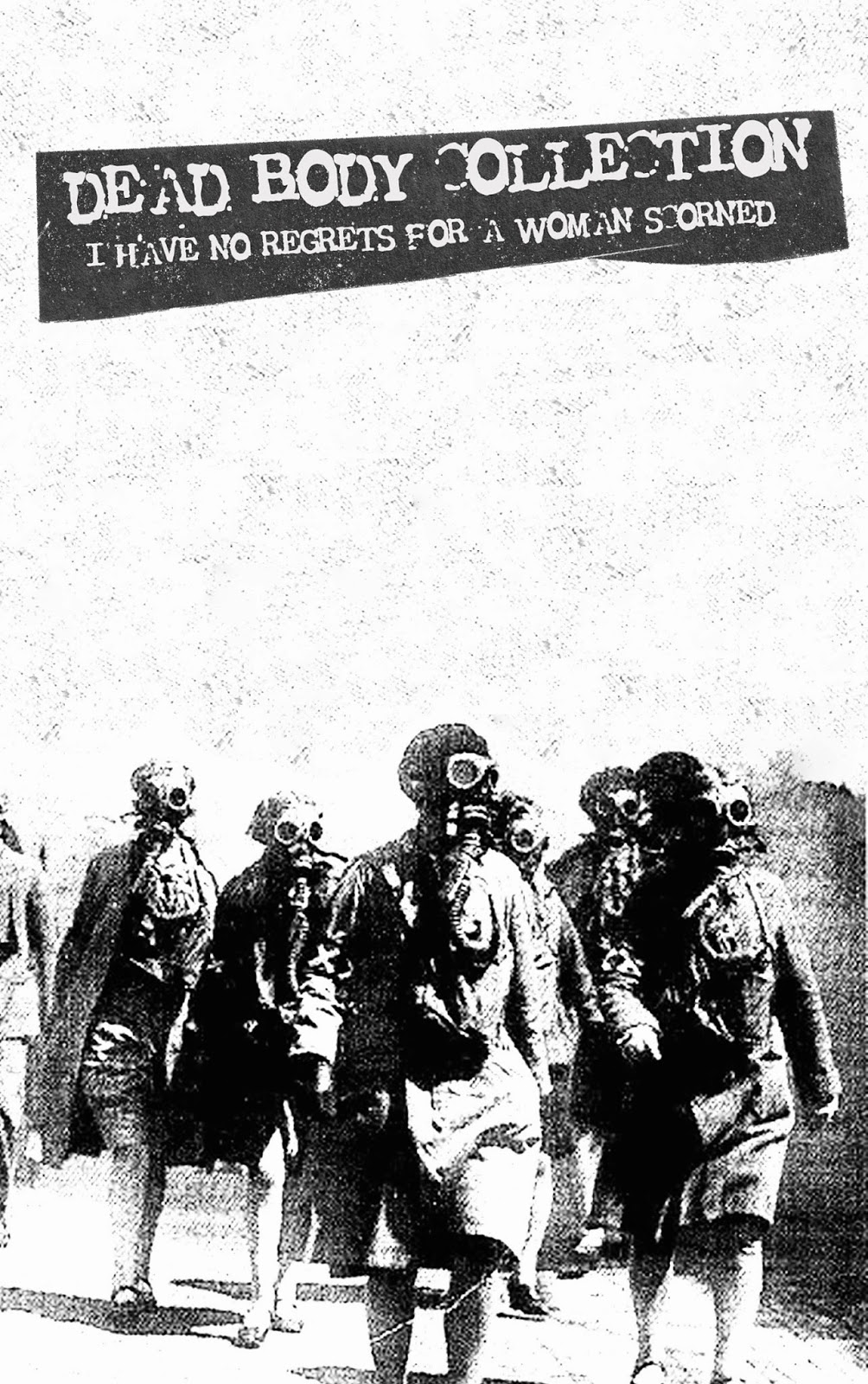 Dead Body Collection “I Have No Regrets For A Woman Scorned” c80 - Dr. Alex needs no introduction. The caustic and frigid walls of Dead Body Collection have cemented the project’s place in history, and he continues the funeral march with this release of solid, unrelenting aural punishment in an enjoyable yet strenuous listen. Inserts printed on red card stock. Edition of 50. 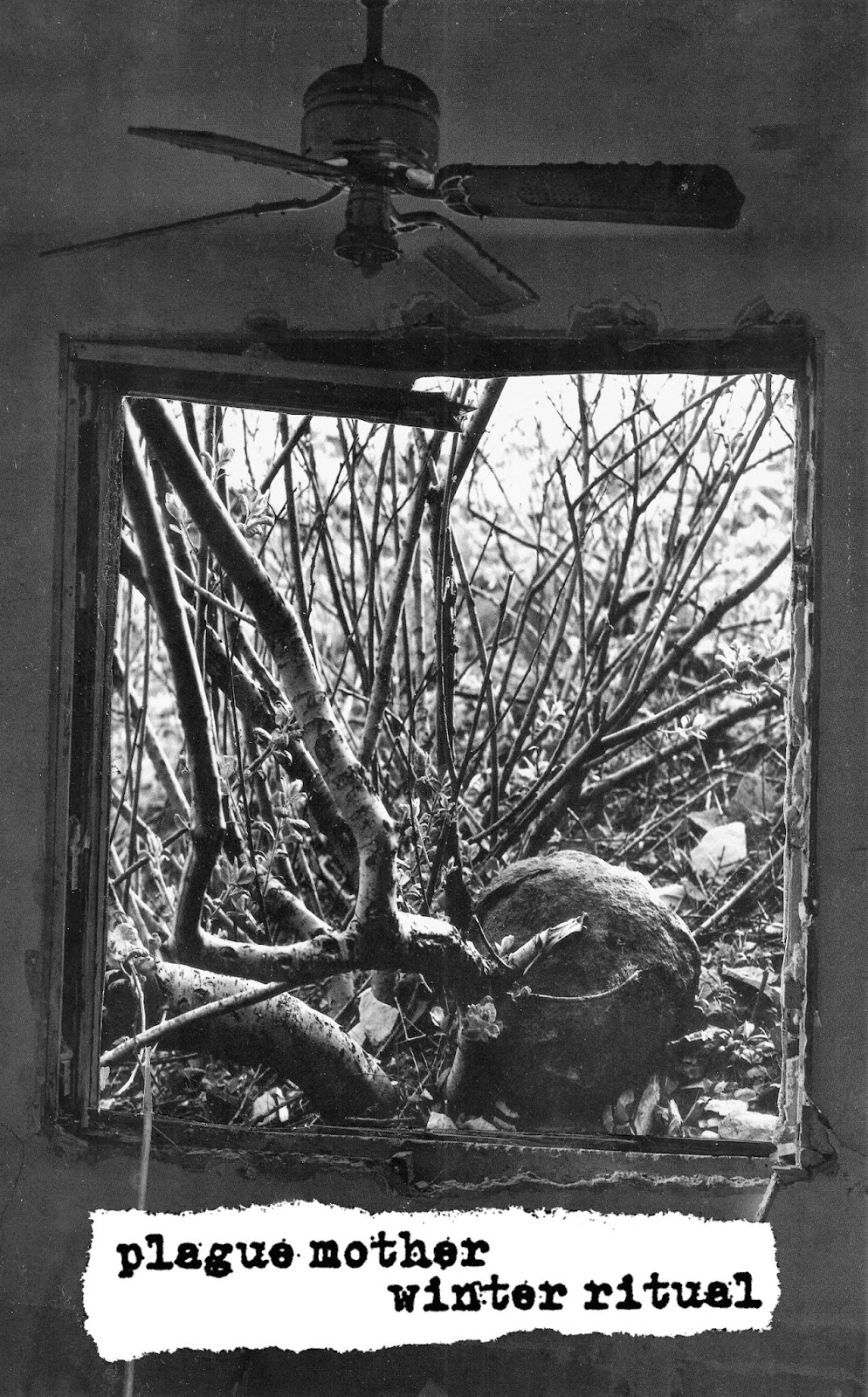 Winter Ritual/Plague Mother split c30 - On the heels of acclaimed releases by each artist on the cult label Beyond The Ruins, both projects on this split bring their unique and gripping approach to the realm of heavy electronics. Winter Ritual takes a more focused, brooding approach over three movements - you don’t notice the air being taken from your lungs until the very end. Plague Mother never gives the listener the air to begin with, providing two pieces  of panic and paranoia. 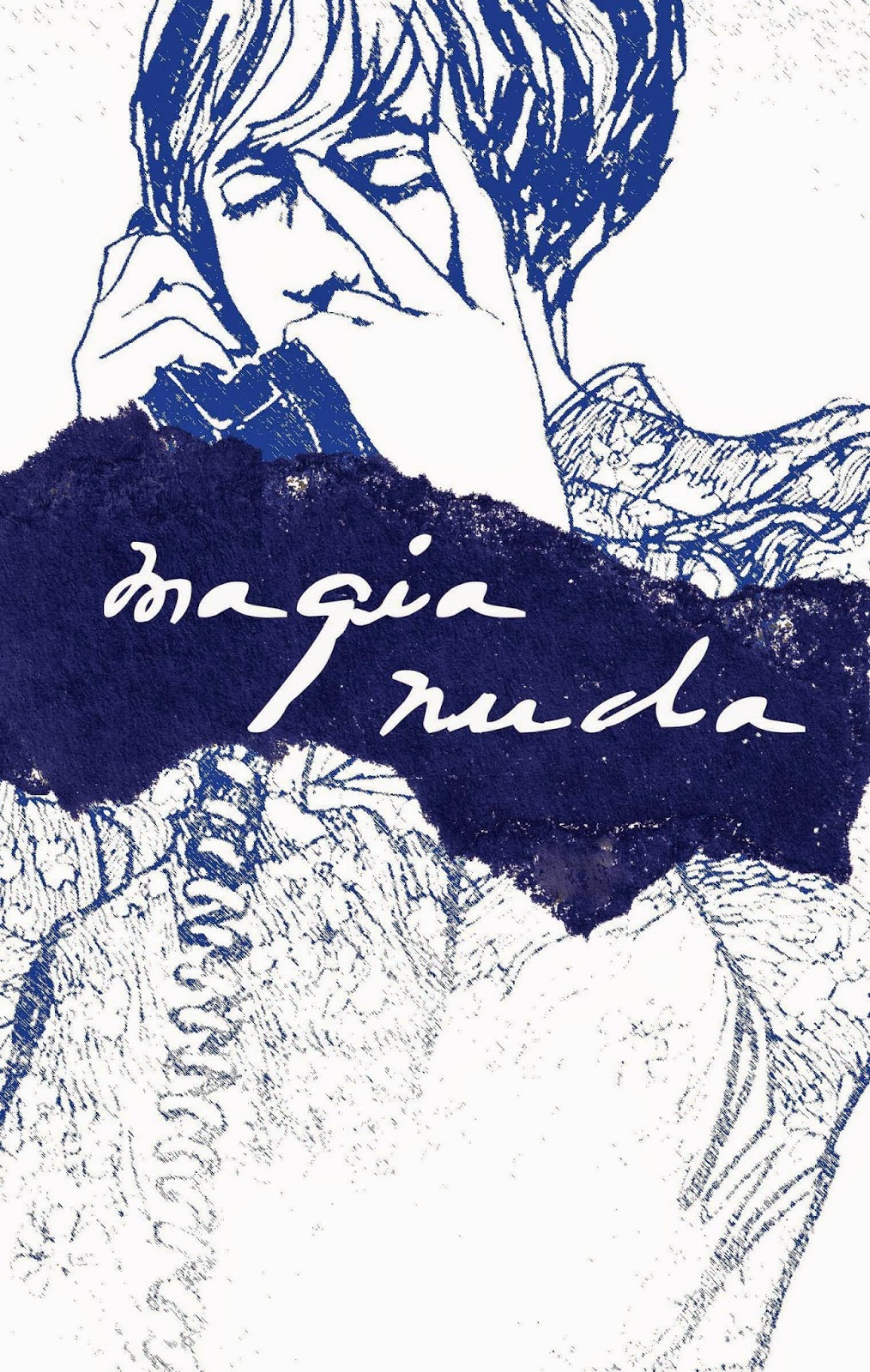 Magia Nuda single-sided c30 - Chicago is a hotbed for filthy noise and power electronics, which makes sense given the city is a warzone in every other aspect and is home to the immortal BLOODYMINDED. Magia Nuda joins the ranks of Deterge and Machismo in a new wave following those legendary footsteps with an onslaught with vicious analog electronics and vitriolic mic work that provides a perfect soundtrack to the slow decay of the no-coast. Full color insert. Edition of 50. 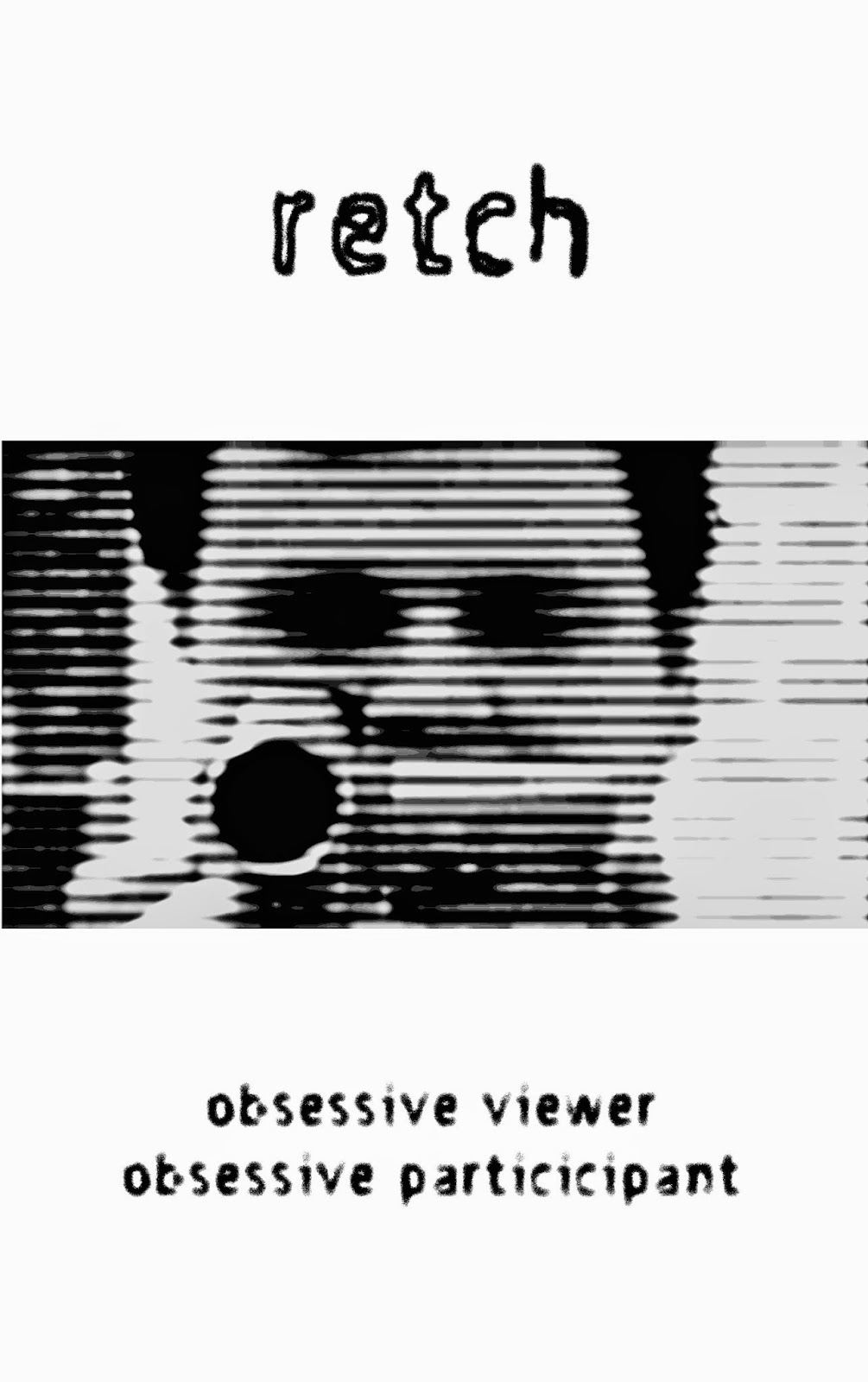 Retch “Obsessive Viewer/Obsessive Participant” c30 - Retch is a collaborative harsh noise project consisting of Roman J (Plague Mother, Mailbomb Solution, etc.) and visual artist, model, and force behind Gut Rot, Sarah Barker. With Retch, these two delve deep into their shared interest in the psychology of serial criminals. Side A is the frantic build-up of excitement the voyeur experiences. Side B is restraint and release as the voyeur crosses the thin veil of his darkest fantasy. Edition of 50. 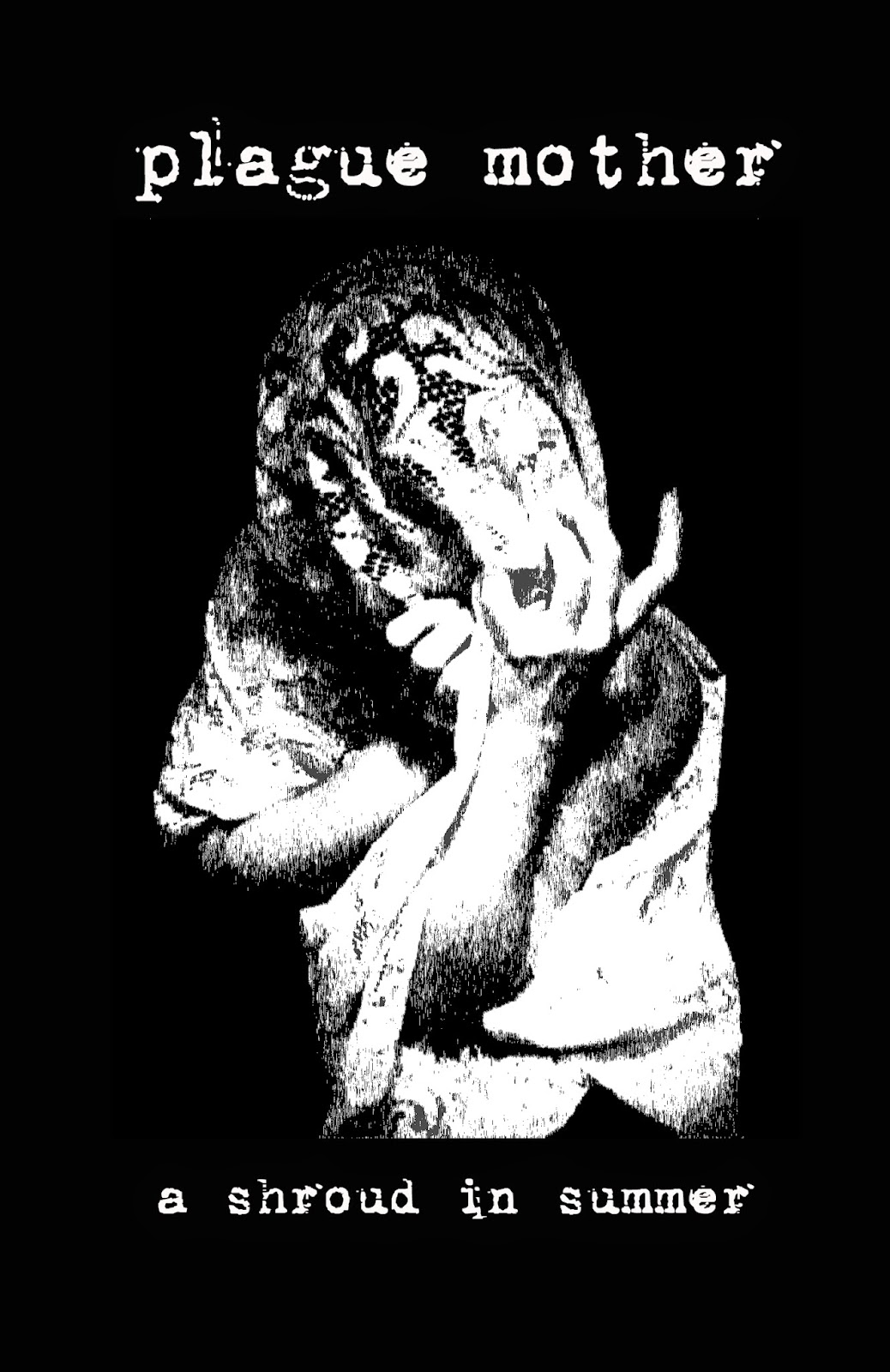 Plague Mother “A Shroud In Summer” c10 - The heat makes fools of us all. It disorients even the most resilient of us. Summer compels us into desperation. A return to the most base sonic explorations with 5 minutes of scrap metal abuse and heavy electronics. Nothing is quiet about these nights. Edition 20 copies.  DO NOT ORDER HERE. THIS ITEM WILL BE AVAILABLE ONLINE ONLY THROUGH ANALOG WORSHIP SHORTLY. A LIMITED NUMBER OF COPIES WILL BE AVAILABLE IN PERSON AT SUMMER SCUM FROM THE ARTIST.

BATCH DEAL: all tapes (excluding Plague Mother "A Shroud In Summer") for $20 US/$30 WORLD.

ATTENTION SUMMER SCUM ATTENDEES:  I will have limited copies of each release available, but I encourage you to order in advance. You can subtract $1/tape since I will be hand-delivering. I look forward to seeing everyone. Plague Mother performs at 9:15 PM on Friday.

Posted by Compulsion Rites at 7:44 AM No comments: If you pre-ordered, your shirts are being shipped!

Delays in my personal life have forced the next batch to be pushed back til July, but its shaping up:

And probably another release or 2 by then.


Thanks for all the patience and support.


Posted by Compulsion Rites at 7:18 PM No comments:

"Frigid architect, the ranks are thinning out..." 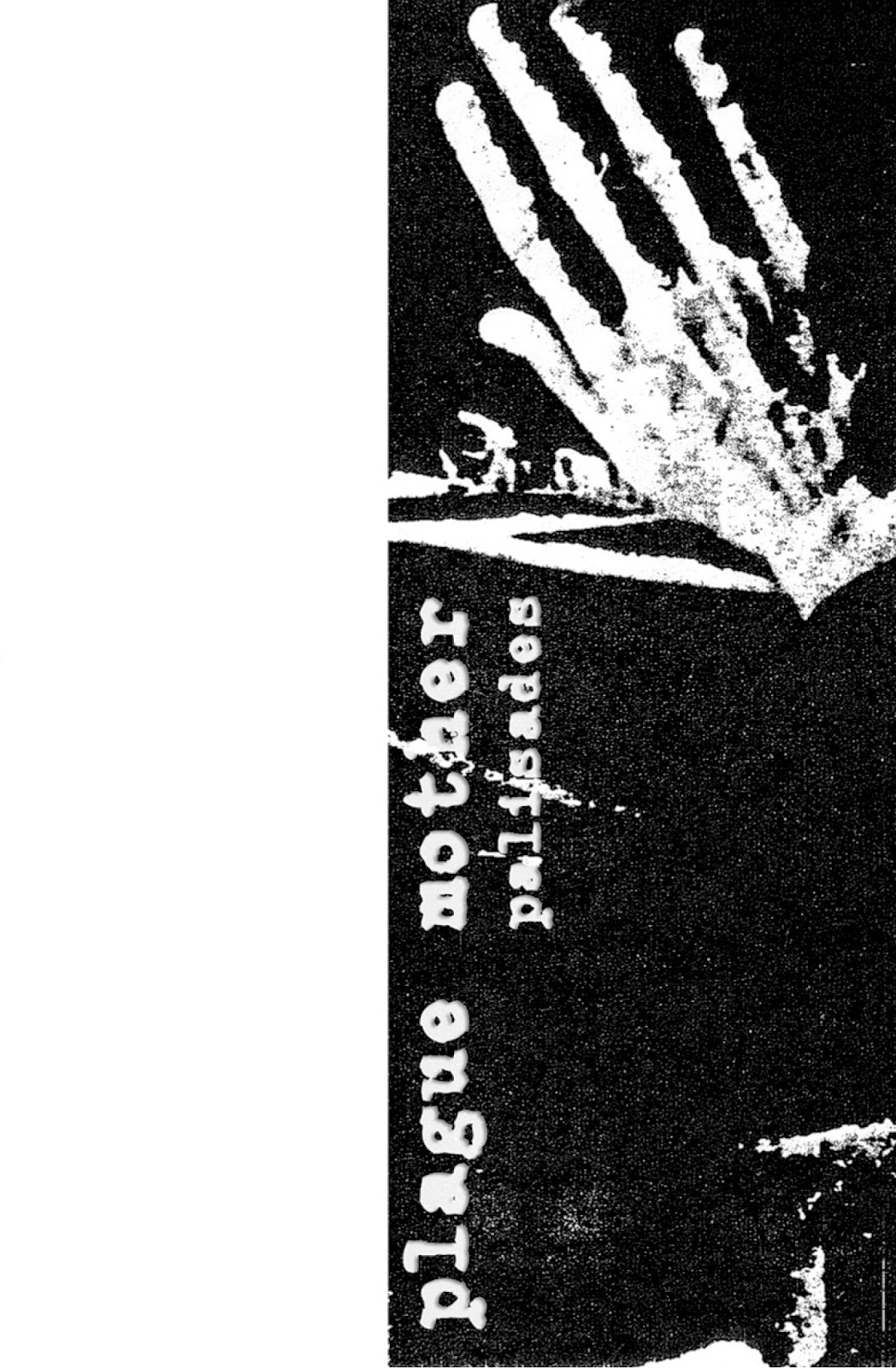 Plague Mother "Palisades" c10 - "In order for fear to exist it has to separate itself. Its existence is dependent on division, on isolation. It has separated itself from the thought process. It disguises itself as the thinker of the thought..."

Posted by Compulsion Rites at 8:39 PM No comments: Compulsion Rites is happy to announce pre-orders for a PLAGUE MOTHER t-shirt. The art is based on an original electrostatic manipulation by Roman J Leyva which will be included in a forthcoming zine + cassette set. Shirts will be printed on Gildan 6 oz cotton shirts by Jeremy Crawford at Syzsmic, whose previous screenprinting work includes shirts for Sick Seed, The Vomit Arsonist, Sick Seed, and others.

THIS IS A PRE-ORDER. SHIRTS BEGIN SHIPPING THE FIRST WEEK OF MAY.

Many thanks to everyone who has continued to support this label as it grows. With this move I am happy to say that we are gearing up for a very productive 2014 with a number of releases scheduled. Expect more news and details as they become relevant. Now, onward to this batch! SOLD OUT! Sunken Cheek / Plague Mother split c30 (CR021)- Two sides of claustrophobic atmospheres and heavy electronics. Sunken Cheek might be the most underrated project in the entire country, as “East East Hill” leaves no dispute as to his flawless execution of tension and catharsis. Plague Mother explores the uncomfortable realm of fever dream states with uncomfortable space and decaying static. Together, this split is a soundtrack to a death Midwestern. Edition of 50. 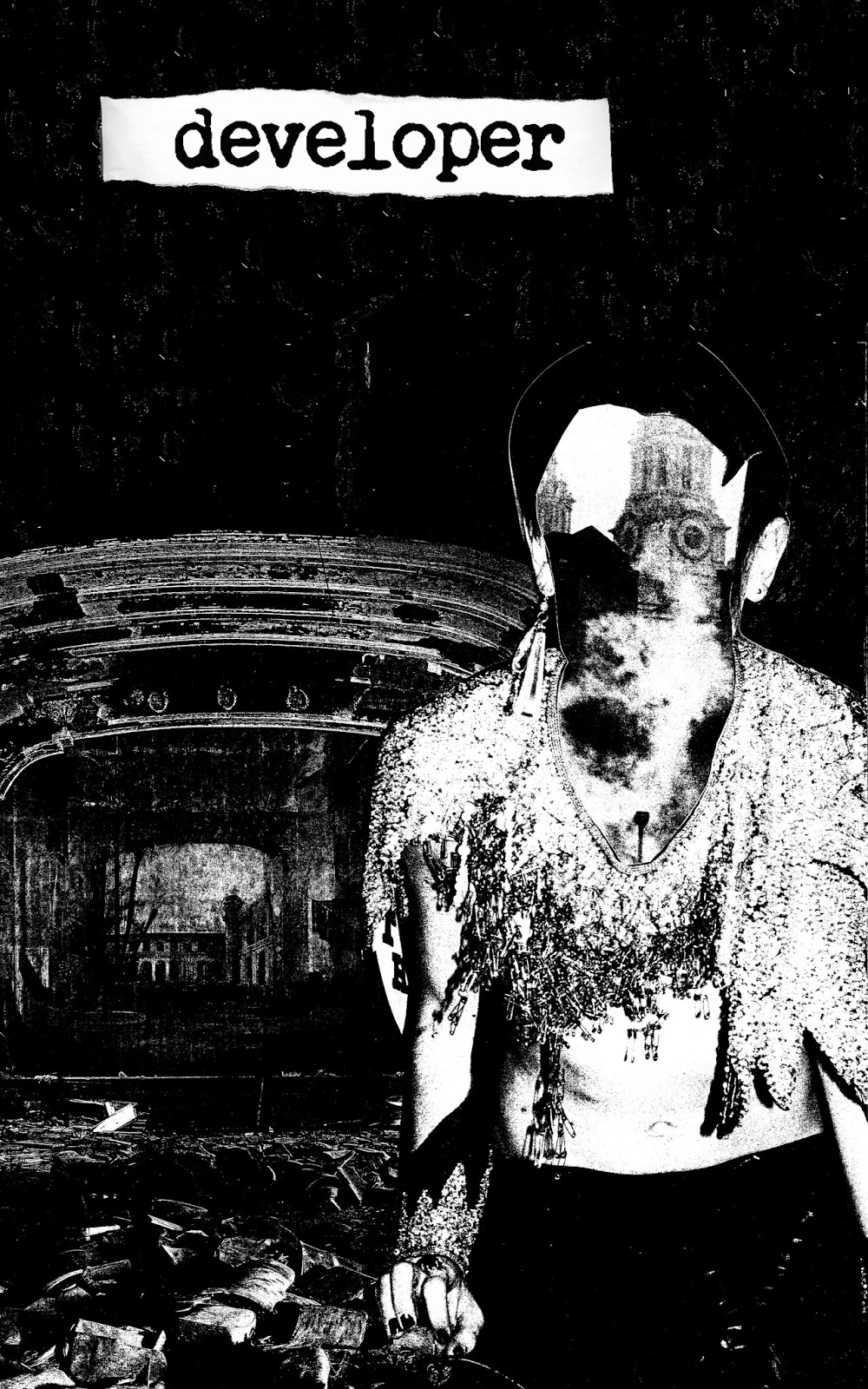 SOLD OUT! Developer c30 (CR022) - Matthew Reis is an innovator with cut-throat precision, and he holds court on side A with almost schizoid intensity, an array of harsh textures zipping across at breakneck speeds, while side B explores a more subtle approach to “harsh musique concrete” with meditative results.  Edition of 50. 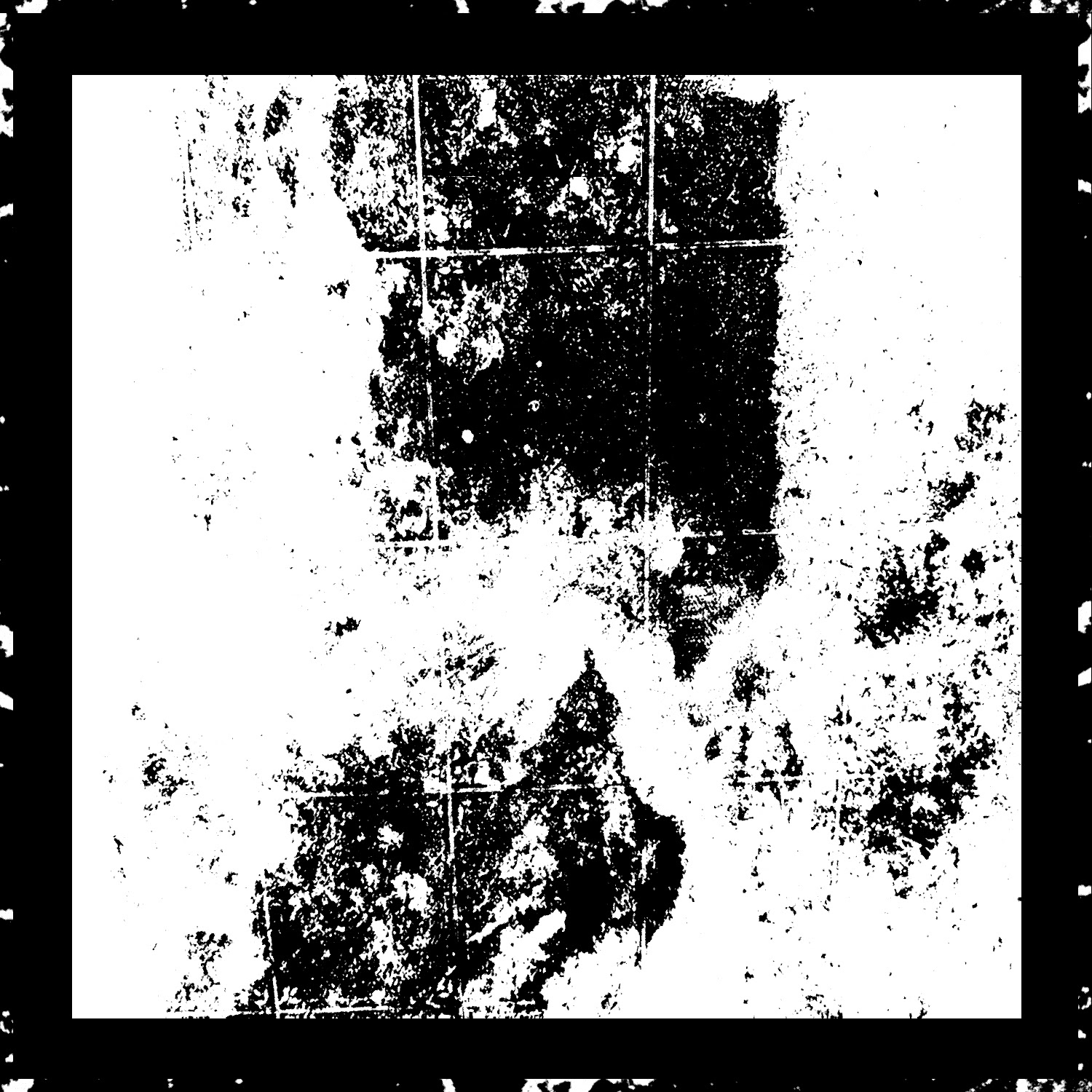 SOLD OUT! Constrain “Default Trade” 2xC10 (CR023) - Thematically building upon his 2013 tape “Travail” (note: track this down if you can, one of the best tapes of last year!) regarding the disgust of daily life and routine, the Los Angeles based Heavy Psych label boss Kevin McEleney (also of Droughter, Life Trap zine) serves up 4 sides of pure harsh noise in frantic cut-up bursts with “Default Trade”. . This double cassette release is house in a 5” reel box and includes 4 double-sided inserts. All artwork done by Kevin, who is one of my personal favorites amongst contemporary xerox manipulators. Edition of 25. 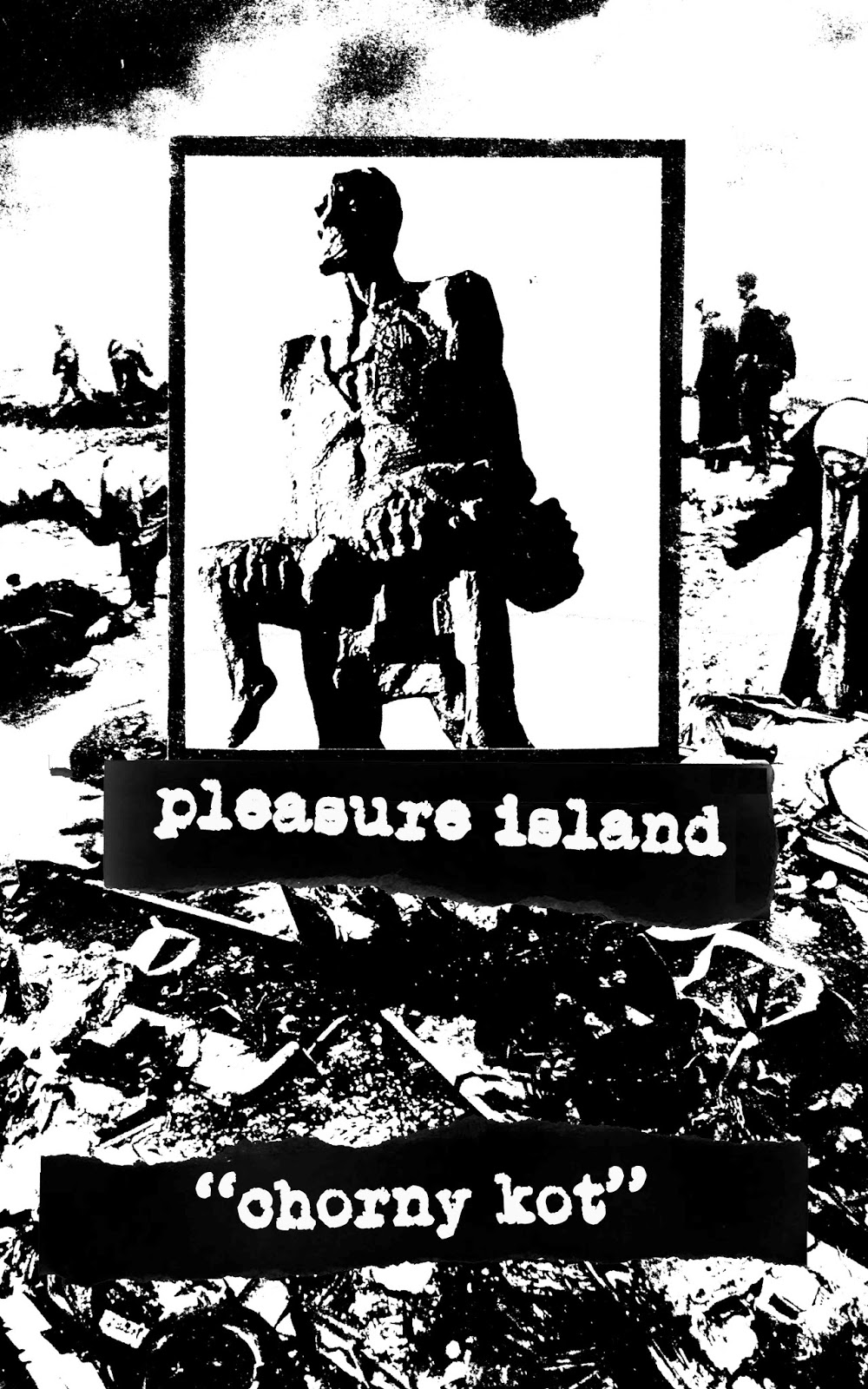 SOLD OUT! Pleasure Island “Chorny Kot” c10 (CR024) - Reflecting upon historical struggle in a former Soviet state that has seen no end to its woes, Pleasure Island uses brooding synths, screeching feedback, and buried vocals to recall tragedy after tragedy over decades of loss and desperation. Archival obsessiveness from this rising star in the American power electronics scene. 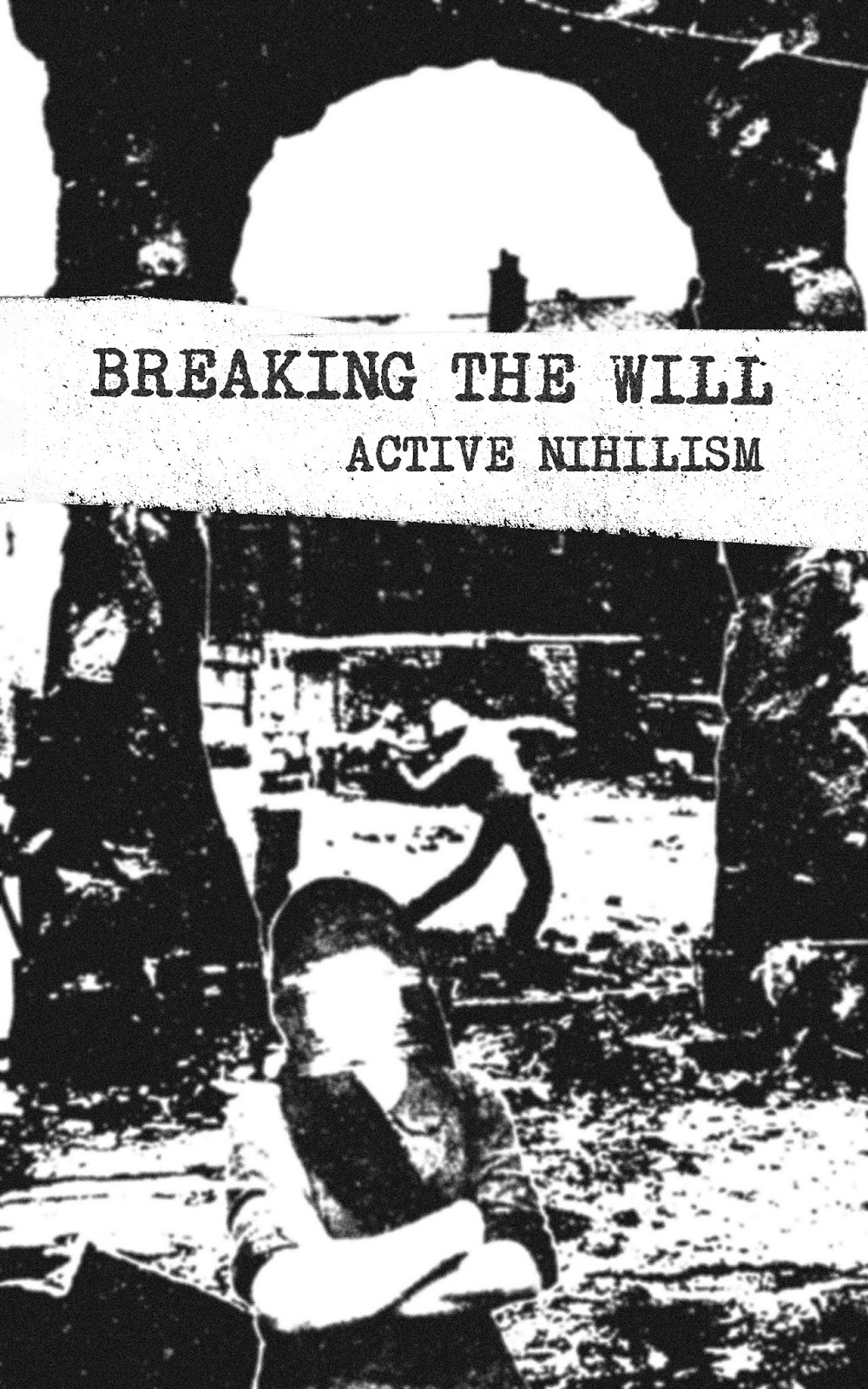 SOLD OUT! Breaking The Will “Active Nihilism” c10 (CR025) - The soundtrack to complete breakdown of social order, chaos bouncing between channels with insurrectionary spirit. Stefan Aune wields harsh noise like a seasoned guerrilla with an molotov: scrap metal abuse, static, hiss and buzz, low end rumbling… all are tools at his disposal in this pipe bomb of a recording. Edition of 50.